The Vote For The Democrat Readme File

First off, some background. Vote For The Democrat is a website dedicated to increasing the ambient positivity surrounding every Democrat who might be on the ballot next November. It lives at www.voteforthedemocrat.org and it’s a personal side project from one person, Joey Castillo, who really wants to make sure we don’t screw it up again in 2020. Contributions are welcome!

First off, some basic notes on the site:

Just find the candidate’s page (it looks like /president/firstname-lastname.md) and edit it, right in GitHub. When you’re done, open a pull request, and I can merge the changes in. Here’s a file from one of the candidates in January 2019:

Between the --- lines is the front matter. They’re like fields in a database, metadata that the Jekyll template will use to populate the page.

The first few fields shouldn’t need to be edited. The title field is the name that appears on each page; viable notes whether the candidate should be shown in the listings. The name and surname fields are used for sorting. If this is a house or senate candidate, there may also be a state and district field in here.

If the photo is in the public domain, such as an official Senate portrait, you may omit or leave blank the photo_terms field. If you are uploading a Creative Commons photo, make sure to include the required attributions. You may use markdown in this field, but keep it short.

The website, donate_link and volunteer_link fields should be full URL’s to each of these pages for the candidate. Please only include official campaign websites; I’ll vet these before merging.

The facebook, twitter, instagram and youtube fields should contain just the candidate’s identifiers for these networks — no full links, and leave the @ symbols out. The Jekyll template for candidate info will format these properly.

The copyright_line, like the photo_terms field, should be filled in with the appropriate attributions for the candidate’s bio.

Finally, below the front matter is the bio itself. For the moment, I’m aiming for 400-500 words per candidate, written in the third person (i.e. not “I believe that,” but “Candidate Smith believes…”). In some cases, campaign websites have bios that can fit this format; in other cases, I’ve raided Ballotpedia or brazenly rewritten official campaign bios. If you’re passionate about your candidate and want to write something better than what’s there now, please have at! The goal of this site is to tout all of the Democratic candidates, and a great bio is crucial to this effort.

Same guidelines apply as above. Make sure to name your candidate’s Markdown file firstname-lastname.md. If the candidate has any accents in their name, include them in the front matter, but limit the filename to lowercase ASCII (i.e. julian-castro.md, not Julián-Castro.md).

You’ll also need to provide a photo. Generally speaking, an official portrait is preferred, both because they are quality photos sanctioned by the candidates themselves, and because they are generally less encumbered by copyright. In the case of portraits shot by federal employees in the course of official business, they are explicitly in the public domain.

Candidate photos are to be cropped to a 4:5 ratio. The final size of all photographs should be 880 × 1100 pixels, in 8-bit RGB with an sRGB color profile. They should be saved as optimized JPEG files with a lowercase .jpg extension. To ensure that the design of the site stays consistent and gives each candidate equal visual weight, you’ll want to follow some guidelines when cropping:

If your image editing program supports diagonals while cropping

If your image editing program supports thirds while cropping 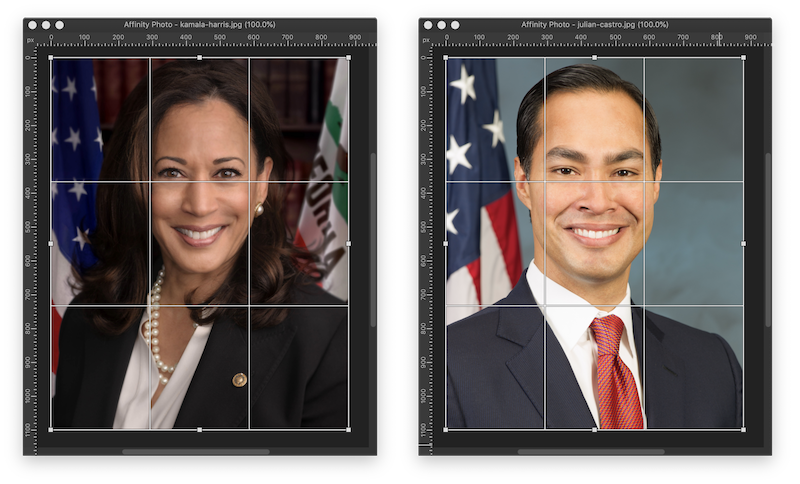 If an official photo cannot be cropped to these guidelines (Cory Booker), is extremely outdated (Bernie Sanders) or has incompatible licensing terms (Marianne Williamson), you should try to find a Creative Commons or CC0 compatible image that can be cropped to fit the guidelines, preferably one where the candidate is facing the camera, with eye contact or an engaged expression. Look for an image with minimal background distractions so that the focus is on the candidate and not the surrounding scene, but do not clone-stamp or artificially blur the background, even if the CC license allows modification. This is an ethics thing for me, not a copyright thing.

Open a pull request touching only the files that need to be changed to add or update your candidate. There is no need to reach out via email; I’ll get notified whenever a pull request is opened.